Rather than writing, lately I've been reading. A LOT. Man, I don't know what has gotten into me, but I've been going through several books a month lately. Maybe working in a bookstore has been having an effect on me. But I love it!

I'm always excited to get in on a book before it goes BIG. Ya know? Same things go with bands. Makes you feel like you discovered them, right? Well the most recent book I've read is written by an up-and-coming, self-published author. I think she has a pretty bright future in writing! I really enjoyed her book and look forward to the next one she writes. Here is my review... 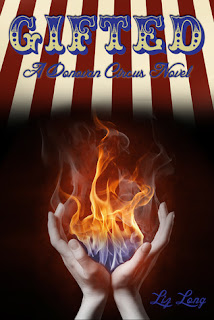 Review of Gifted: A Donovan Circus Novel, by Liz Long

Overview:
Lucy Sullivan was special. "Gifted". She possessed the supernatural ability to create and control fire. She spent the first several years of her life as part of The Donovon Circus, alongside her parents. Lucy's father was delighted that his daughter had inherited had inherited his gift of of being a Firestarter.  He even said that his proudest moment was when Lucy, as a toddler, first discovered her gift by burning up the sofa. When Lucy was 12, however, her parents decided to retire from the circus, mainly due to her mother's desire to live a normal life among regular humans. Wanting to have a normal life was understandable, though at times quite challenging for an exceptional girl to be "normal". But what came as strange was that it wasn't long after leaving the circus that Lucy's father forbade her from ever practicing her gift, even in private,  or ever having anything to do with the circus.
After the deaths of both her father and then her mother, Lucy decides to rejoin the circus, to both embark on something new on her own, and for a taste of the home she once knew and longed for. A place where she could be herself.
Rejoining the circus kicked off with a flurry of activity -- much had changed since she was a child, and the days seemed to go nonstop. But Lucy quickly relearned the ropes and fell in with a group of friends, each with their own unique abilities. From her speedster roommate, to telepaths, shape-shifters, and and fellow firestarters, and a few with more mysterious gifts, Lucy began to feel at home with her new family.
But things soon begin to change as several unexpected events shake the circus. When a fellow circus member turns up dead, the prime suspect is Lucy. Desperate to clear her name and return things to how they were, Lucy starts to dig deep into the past and secrets of the circus. The lines between friend and foe begin to blur, and the things she uncovers could change everything....

My thoughts on "Gifted":

This book was an absolutely enjoyable read. It had intriguing characters that were well developed, It moved at a great pace, kept me in suspense, and made me want to keep reading long past my bedtime.

It had the three main things I look for in picking a good book:
1) Good cover. Lets be honest, if I am not already familiar with a book, it is the cover that makes me pick it up off the shelf and read the back. Yes, I judge a book by it's cover! This one really drew me in and made me want to know more about it.
2) Interesting from page one. Ugh! I can't stand it when people say "Oh, the first few chapters of such-and-such book are pretty slow, but it will pick up about half way through." Seriously? If I'm bored in your first chapter i'm not going to move on to chapter 2. Gifted was great. From the first pages I was instantly pulled in, I knew who the main characters were, and had a general idea of where the book would go. Simple, but it seems like more authors need to be taking notes on this from Ms. Long!
3) Well developed plot. Again, seems like a no-brainer, but I've been disappointed on this too many times. Not with Gifted! This story was thought through from start to finish and progressed extremely well. No needless filler. No excruciatingly long stretches of describing scenery that we don't care about, No pointless rabbit-trails.
4) Well developed characters. I really felt like I knew the characters!  They were deep, and complex. I could laugh with them and cry with them. Whether or not I was crazy about the characters themselves, I felt that I could like or dislike them because I knew them well and could judge accordingly. If I lived in the world of Donovon Circus I would probably be good friends with Delia, I would avoid Angel and Gabriel because they would creep me out, and would most likely have a crush on Keegan if I weren't married :)
At bit on the main character.... I loved Lucy. Unless I hated her. Let me explain: She was Smart, witty, and fun, with a seriously cool gift and fiery red hair to boot. She worked hard and excelled highly in her gift. I wanted to be her BFF. But she also couldn't make a firm decision on her own and was totally fickle as she played with boys hearts while they played equally with hers. She was oblivious.  I wanted to punch her. But she also kicked butt, which pretty much rocked.

For me, this book was all my favorites wrapped up into one. A little bit of The Night Circus, Water for Elephants, X-Men, and a whole lot of the TV series Heroes. Similarities can be a good or bad thing. You want it to have enough familiarity to have a frame of reference to put it into. But you want to be able to look at a piece of literature for itself, not be comparing it to something else, thinking things like "oh, so that person is just like Peter Petrelli, and this other one is just like Syler".

All in all, I really enjoyed reading Gifted and will definitely recommend it to my friends :) Any plans for a sequel? I'd read it.


Note: I was not paid to do this review, however, the author gave me a free copy of the book in exchange for an honest review of her work.
Posted by ELeeds at 9:40 PM