Yes, my oven saga continues. The repairman came yesterday and again "fixed" my oven. And by "fixed" I mean looked at it briefly, recalled the last time he looked at it, and said that it was working just fine.
I wasn't at home when he came by. When you live in an apartment complex the repairman can just let himself in whenever. I am thankful for the extra bolt on the door...
If I had been at home, I would have pointed out something new in the behavior of my stove: 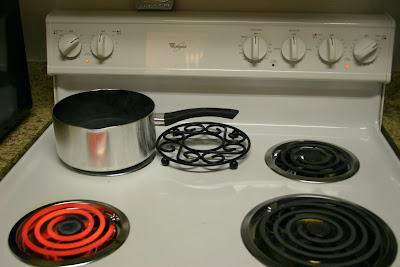 Notice the two knobs on the far right and far left. They control the two front burners. They were both set to High a the same time and this photo was taken about 15 minutes after they were turned on. Notice anything funny? They should both be bright red, right?
In reality, the front right burner was barely warm. I turned it off then back on again... Where the element plugs in, it sparked a few times.  A third time I turned if off then on again and it heated up normally. But it is far from normal.
So now I'm having problems with the oven AND the stove top.
The repairman tried to tell me before that my oven was behaving normally, and that even if he replaced it with a brand new one it would still work the same. Okay, prove it. Can I have a new oven?
I will be going up to the office tomorrow. The folks in the office are great, and when I detailed my oven problem before they agreed that it was unusual. We just need to get the repairman on our team. But right now... I feel rather insulted by him to be told that my oven works fine when I've put in a repair request twice, soon to be three times.
Posted by ELeeds at 10:37 PM

That must be frustrating! I hope you get it straightened out soon!

Thank you. The folks in the office are cool, so I'm pretty confident they'll help me out. I'm just so tired of the guessing game of "what temperature do I set my oven at to achieve my desired real temperature?"