What do you think of when you hear the word "Sphinx"? Okay, besides the fact that it is awkward to say, and that you can just forget about it if you have a lisp. On a side note, who's cruel idea was it to put an "s" in lisp? Seriously folks...

Back to what I was saying... What do you think of when you think of a sphinx? Your mind goes off to pyramids and sand and camels and then something like this, right?

Well... The other day while strolling through Cheekwood Gardens in Nashville, TN my idea of the sphinx was totally rocked. Are you ready for this? 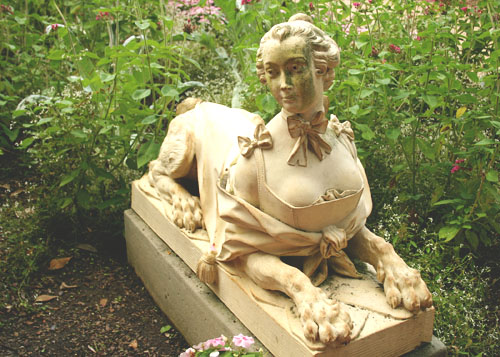 It's a Victorian style sphinx! I had NO idea there was such a thing. I thought it was purely an Egyptian mythology thing. Were you aware that there were Victorian sphinxes? If so, that would make one of us. As for me, my world is officially rocked and I am enlightened.