Review of The Scorpio Races, by Maggie Stiefvater. 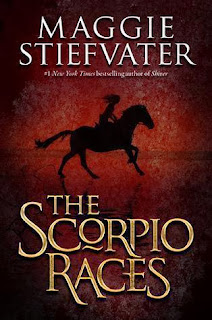 Each November, on the Island of Thisby, riders mount their capaill uisce -- fierce wild, water horses whom they have captured from the sea -- for the Scoripo Races, in hopes of making it to the finish line alive.

Puck loves the island of Thisby. It is her home and her heart. She and her two brothers share the house they grew up in. The only thing missing from her childhood home is her parents. Years ago her parents had gone out together on a boat that had been attacked by a capall uisce. All she remembers is that they went out, and that then she knew they were gone. She misses her parents greatly, but does her best to keep going and make ends meet, and she finds joy in her brothers and in her little island horse, Dove. There isn't much she would choose to change about her life. But Puck's older brother is another story. He suddenly springs on his siblings the fact that he can no longer stand life on the island. He is leaving the island, moving to the mainland, as soon as he can. Shortly after this surprise comes another -- The house they thought was paid for is not, and they are going to lose it soon. Puck takes matters into her own hands and decides to enter herself and Dove in the scorpio races. She hopes that if she wins her brother will stay, and that they will be able to pay for and keep their home.

Sean has the Scorpio races in his blood. His father was a racer, and ultimately lost his life to the races. Sean is a four-time race winner on his beloved capall uisce, Corr. Even though Corr is owned by his wealthy employer, Benjamin Malvern, Corr and Sean have a deeper connection than ownership and money. Sean belongs to Corr as much as Corr belongs to Sean.  But Sean's greatest desire is to be out from the bonds of Malvern and to buy Corr. After much arguing over the issue, Malvern agrees to sell Corr to Sean, but only if he wins the races again.

Puck's entering the races is not received well by the other riders. Up until now, only men have ridden in the races, even though there are no rules regarding this. Puck is the first woman to ever ride, and she and her small island horse not only face some tough competitors, but they don't want her there and they try to scare and force her away. Sean is not offended by the fact that she is a woman in the races, but realizing the danger she is causing, warns her to get her "pony" off the beaches. Because of this they don't get off to a great start, but he soon begins to see her spirit and determination and he comes along side her to help her train.

Before long they are in these races together, each wanting to win, and each wanting the other to win. The problem is that only one can win.


My Thoughts:
I wasn't so sure about this one as I started it. The Scorpio Races? What a STUPID idea! It's basically like drag-racing on vicious, wild horses. Why is this a community supported event? Not to mention, why are the two main characters even remotely interested in having anything to do with the races after they both lost parents to these horses? I still have these thoughts, but the book was good enough for me to get past this.
The story was a great mix of reality and mythological legend. It was real enough to relate to, and magical enough to keep you intrigued to the very end.
I liked that this was not a romance novel. Sure there was a little bit of romantic attraction, but it was very little. And really, what was there was deeper than just romantic attraction, but more of a genuine caring for each other that grew out of their time together and the challenges they faced together. Nothing ushy-gushy.
Posted by ELeeds at 4:25 PM